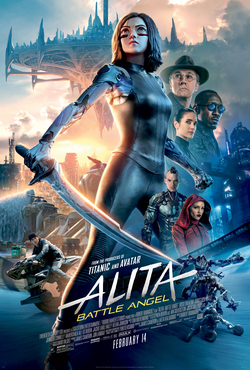 Okay, so having seen the movie, here are my thoughts:

Settings wise, this is a good example of how to adapt a story. If you’re gonna move things around, move everything around. It’s clearly set somewhere that’s meant to be central America, and Alita is played by Latinx actress Rosa Salazar, and there are a lot of POC in the film. So notch on that.

Then there’s the rest.

Every event happens so fast you can’t develop any sense of accomplishment or sympathy for anyone, so its emotional payoffs tend to fall flat unless you’re currently in a highly emotional state like I am, and ends up feeling like it could have benefited from an extra six to ten hours (yes, there’s that much material in there).

The action scenes are well paced, but because there’s a lot of stuff happening, they very rapidly go from “oh that was cool!” to “oh, another action scene, yay.”

There’s really not a lot to cringe about…exceeept one comment.

Do I recommend you watch it? Sure, yeah, but at a leisurely pace. Like “oh, it’s tuesday and I have nothing to do for two hours.” Is it better than Ghost in the Shell? Definitely. But that’s a low bar set by the lack of any ScarlettJohanssonification of anybody.